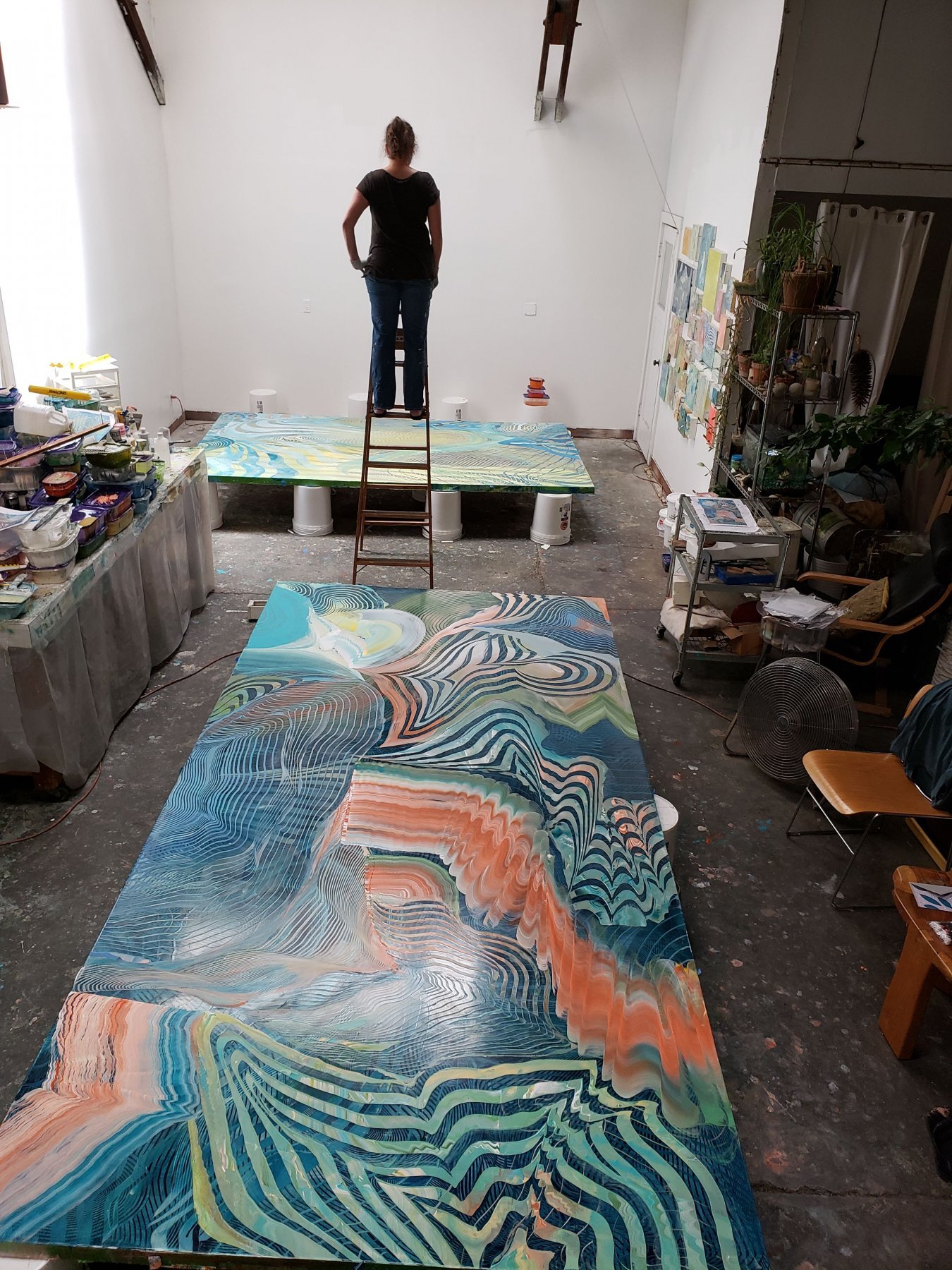 Lorene Anderson is a painter interested in the manipulation of two-dimensional space: math, cosmology, physics and their relationship to biology inspire her work. She frequently pours paint, and more recently, employs gestural brushwork & carved squeegees to pull paint across surfaces creating linear, layered compositions. Born in Kansas just days after a major tornado, Lorene Anderson went on to spend her childhood in Ohio and West Virginia. She received her B.F.A. from Miami University of Ohio and her M.F.A. from U.C. Berkeley, where she received the Eisner Award for painting. Anderson’s work is held in various private and public collections, including the Berkeley Art Museum, UC Davis Health, Walnut Creek Public Library, Imagery Estate Winery Artists Collection. She has been exhibiting her work in museums and galleries internationally, including the Los Gatos Art Museum, Marin Museum of Contemporary Art, Kyoto Museum, and Sakai City Cultural Hall (Japan). She has completed residencies with the Sam and Adele Golden Foundation for the Arts (New York) and La Porte Peinte Center for the Arts (France). In 2017, her paintings were included in a group exhibition of 16 Bay Area Women Abstract Painters. She recently completed two large painting commissions for the UC Davis medical campus. Lorene lives and works in Oakland, California.

Getting back to it — setting up for a full week in the studio after the holiday break.⁠
.⁠
.⁠
.⁠
.⁠
.⁠
#studioview #backtowork #studiosunday #loreneanderson #paintstudio ...

A just-finished painting & a #wip on my studio work table. Swipe to see the painting & some details.
.
.
.
.
.
#doublesidedpainting #artstudio #loreneanderson #controlledchaos #psycadeliclandscape ...

I take a studio photo every day before I get to work. It helps me track progress over a period time. This morning I tried my iPhone’s extra wide angle — kinda trippy! Enjoying my unusually neat studio this week 😝

Next! I've been working on this painting bit by bit, layer by layer over the past few months. It's finally ready for the final painted layer. The larger the canvas, the longer it takes for a clear polymer layer to dry. My paintings can have up to 10 or more distinct polymer layers. Even if a clear layer is dry to the touch, I wait until any cloudiness disappears before I add more paint. #workinprogress, #acryliconcanvas, 72 x 72 inches⁠
.⁠
.⁠
.⁠
.⁠
.⁠
#finalstretch #studiolight #wip #layers #gesture #loreneanderson #paint #artstudio #artistsofinstagram #californiaartist #studiolife #stateofthestudio #acrylicpainting #femaleartist #contemporaryart #abstractart #artstagram ...