whirligig 1. a child’s toy having a whirling motion 2. merry-go-round 3. a. one that continuously whirls, moves, or changes    b. a whirling or circling course (as of events) This series of paintings continues to explore things that aren’t still, such as shifting light, air currents, sound waves, water, time. The new paintings explore movement, turbulence, gesture and movement of space. Whirligig seemed an appropriate term to describe these paintings and these turbulent times in our society.   I play with figure-ground by scraping and striping so negative & positive space take turns being in the forefront. Scraping and removing paint in striped patterns alters perception and balance while revealing multiple spaces and new layers of information under the topmost layer. Each layer is a reaction or conversation with the previous layer, showing the history of revision, exploration and repetition in the painting. I frequently pour paint, and more recently, employ gestural ribbon-like brushwork & pull hand-carved squeegees across the surface simultaneously removing paint while creating linear compositions. Striping bends space and vibrates the picture plane; there is constant folding and unfolding–a cross-section of layers where some planes are parallel, some intersect. 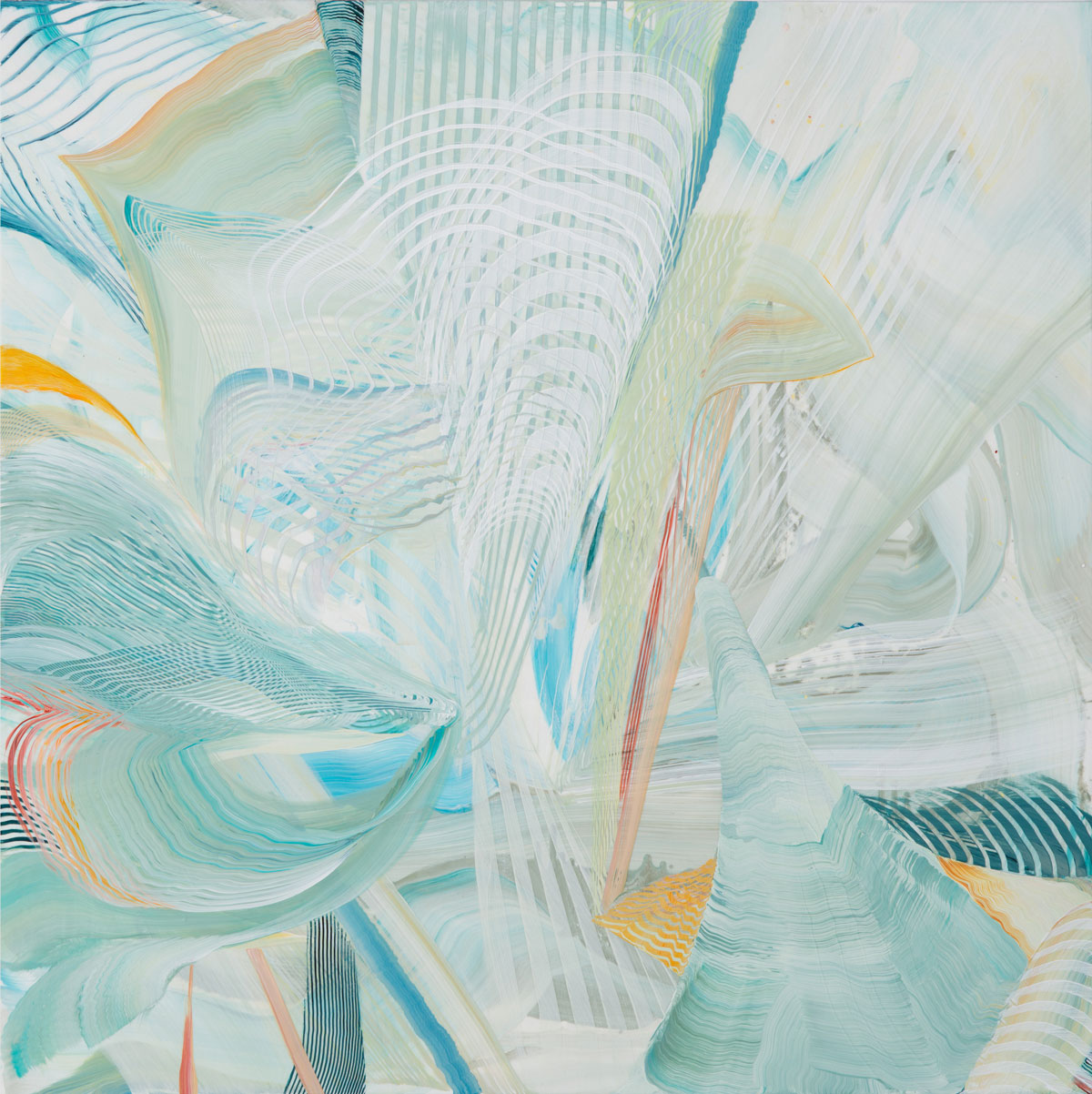 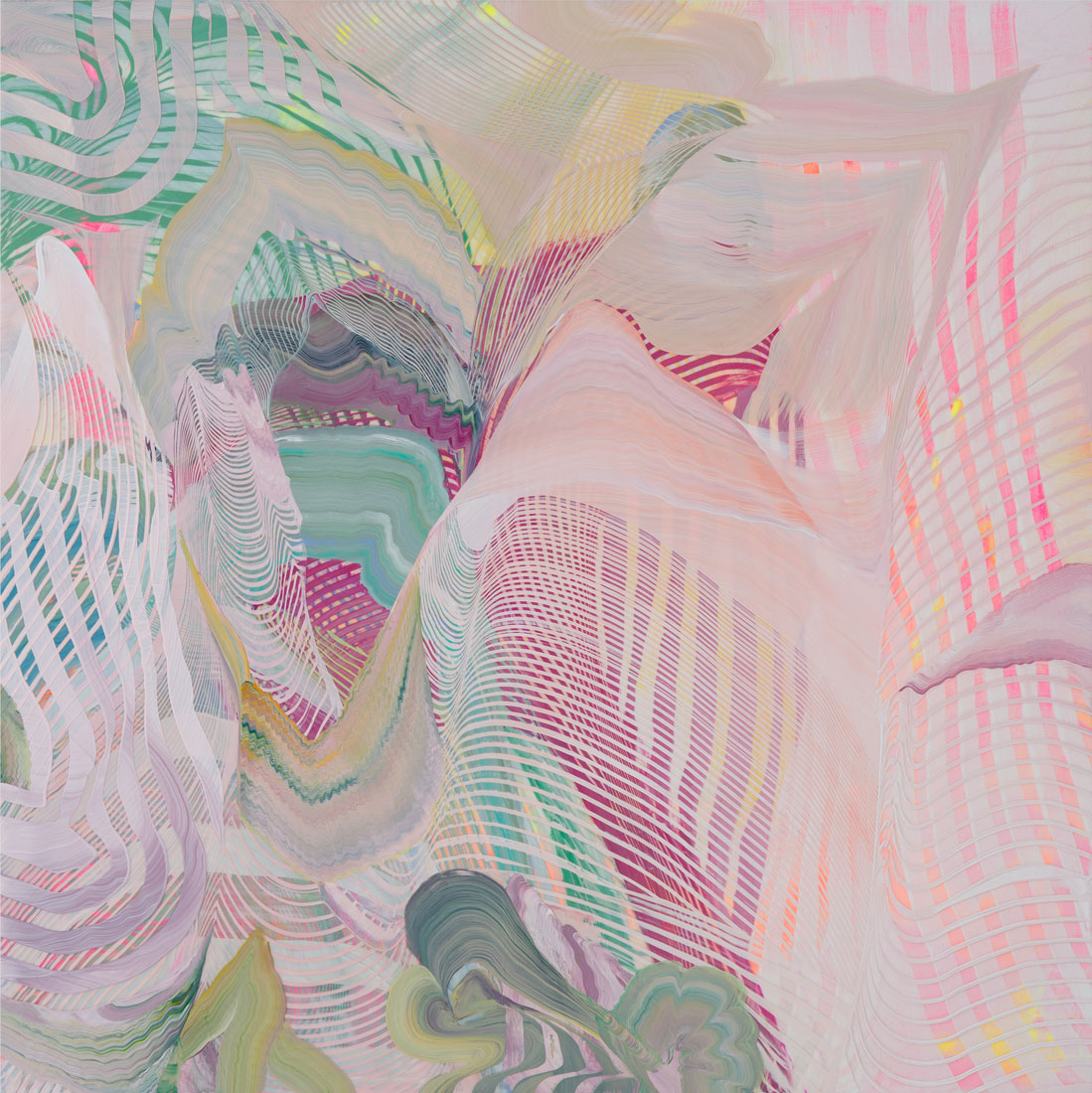 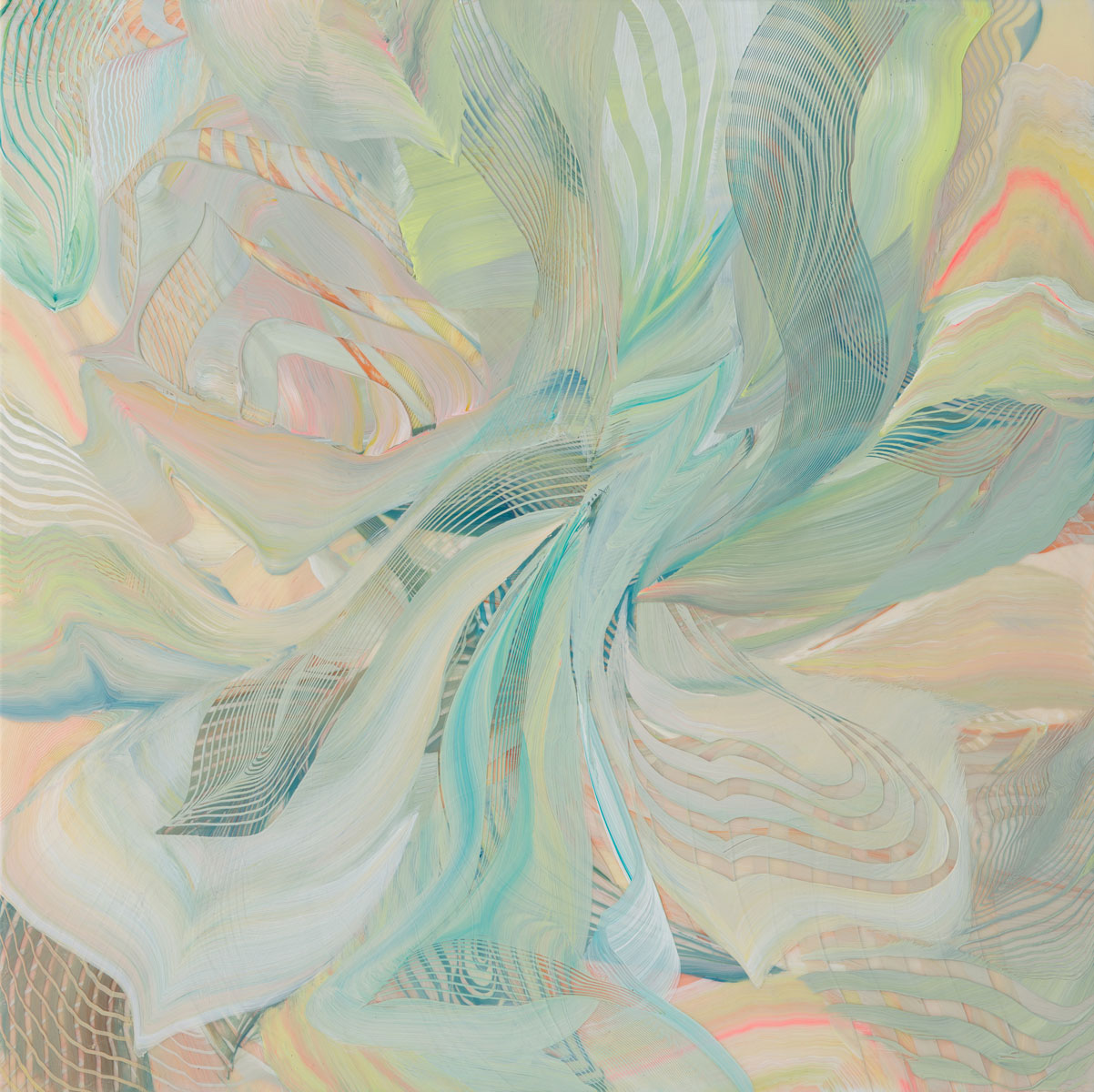 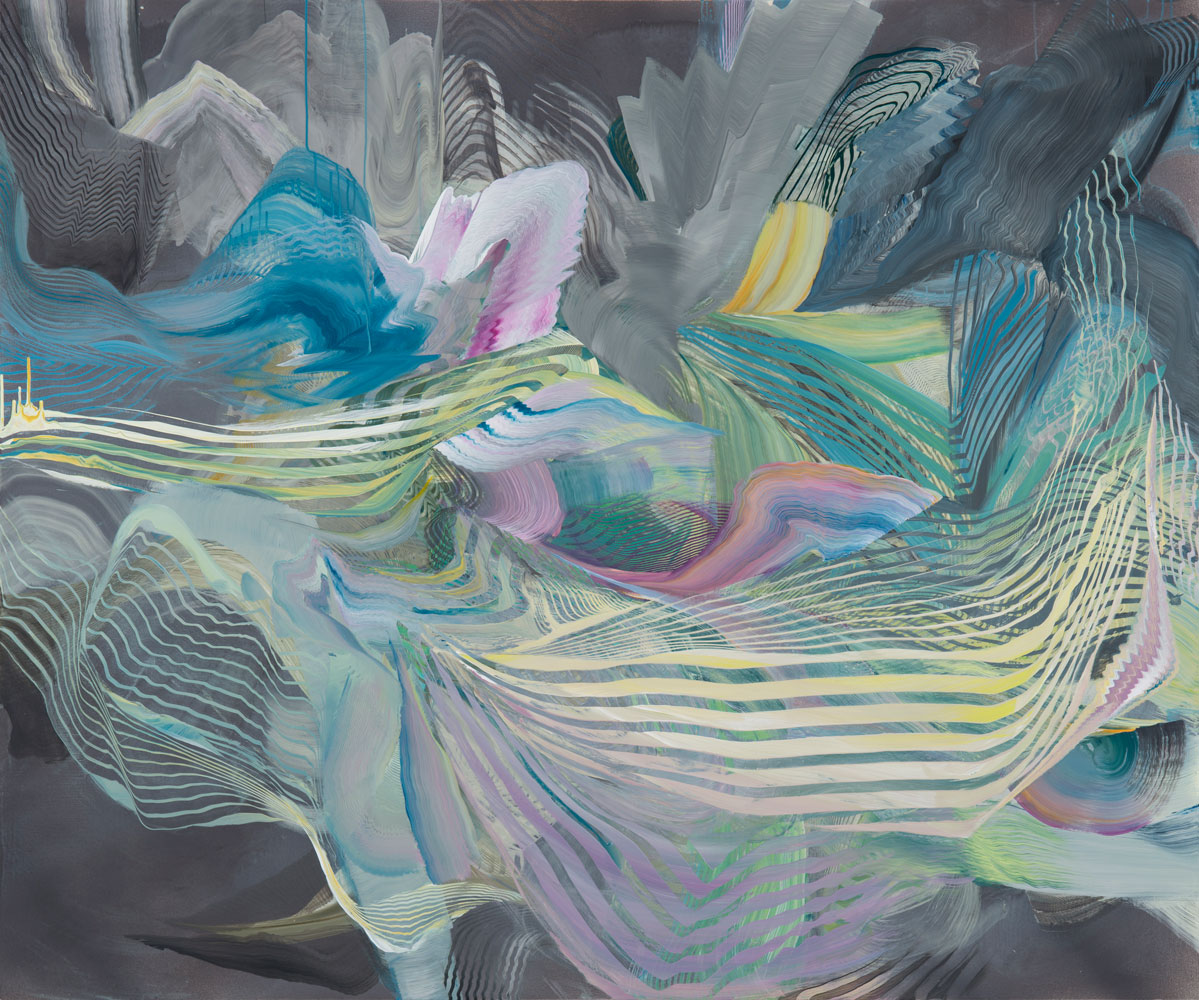 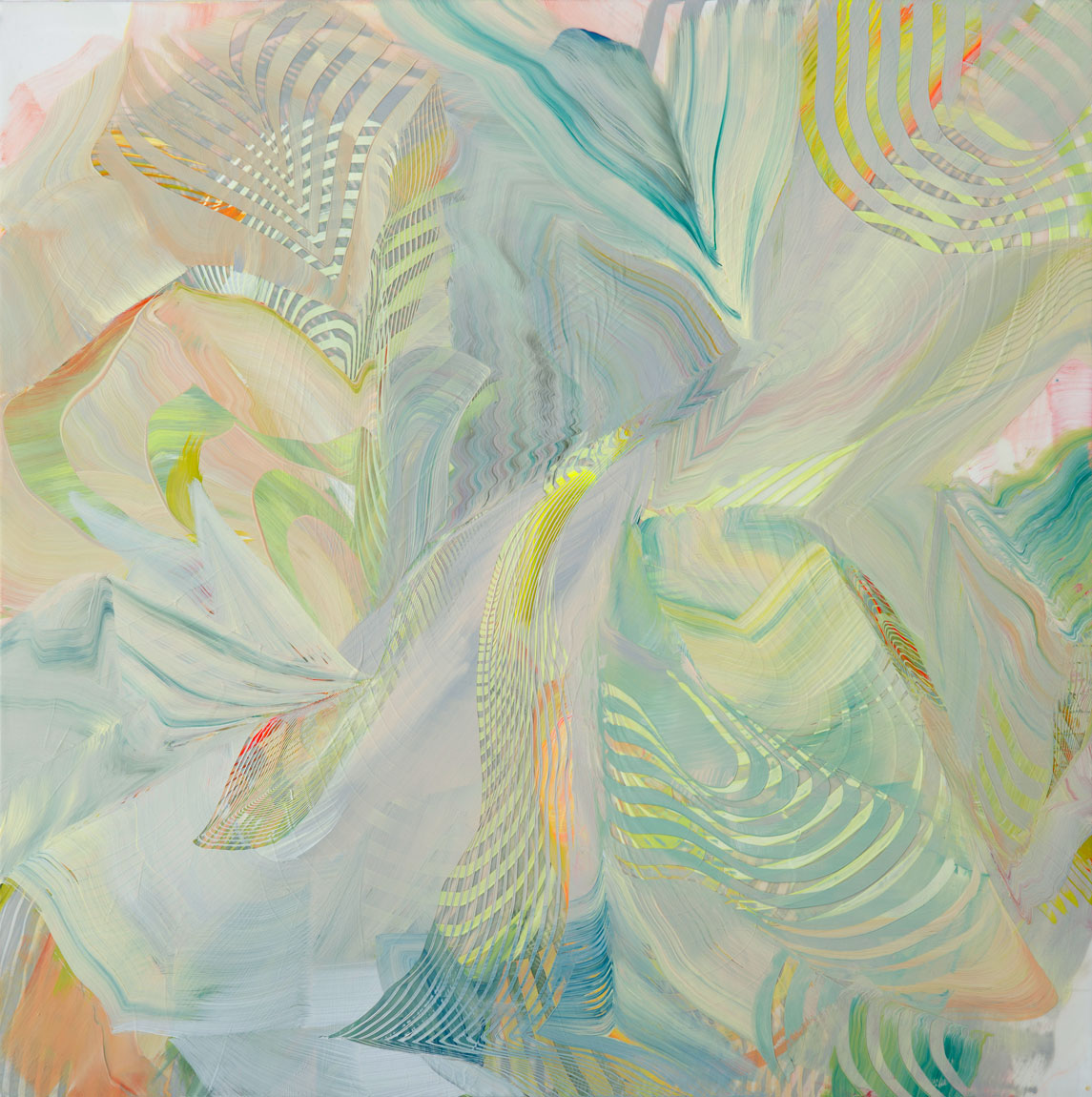 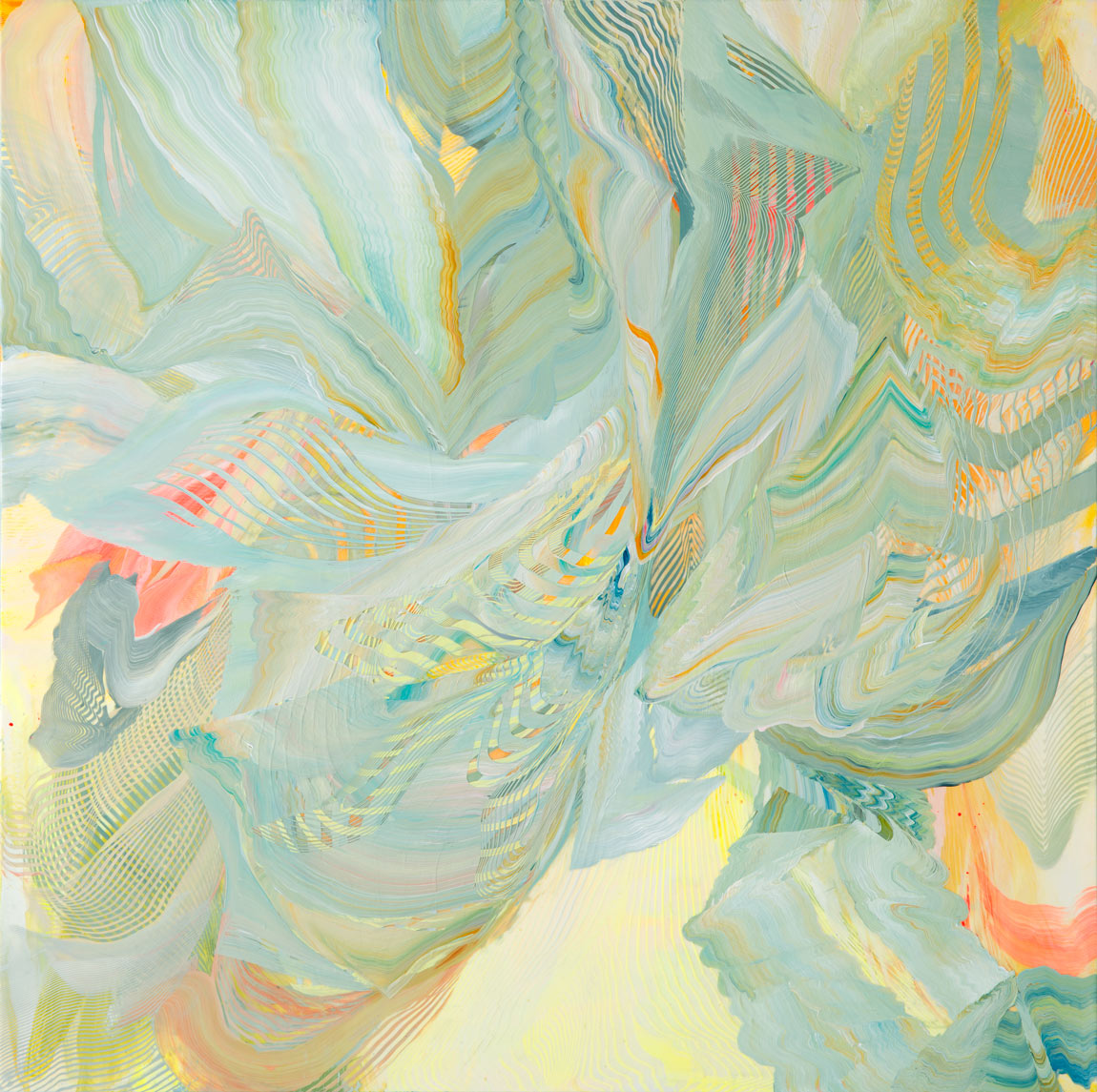 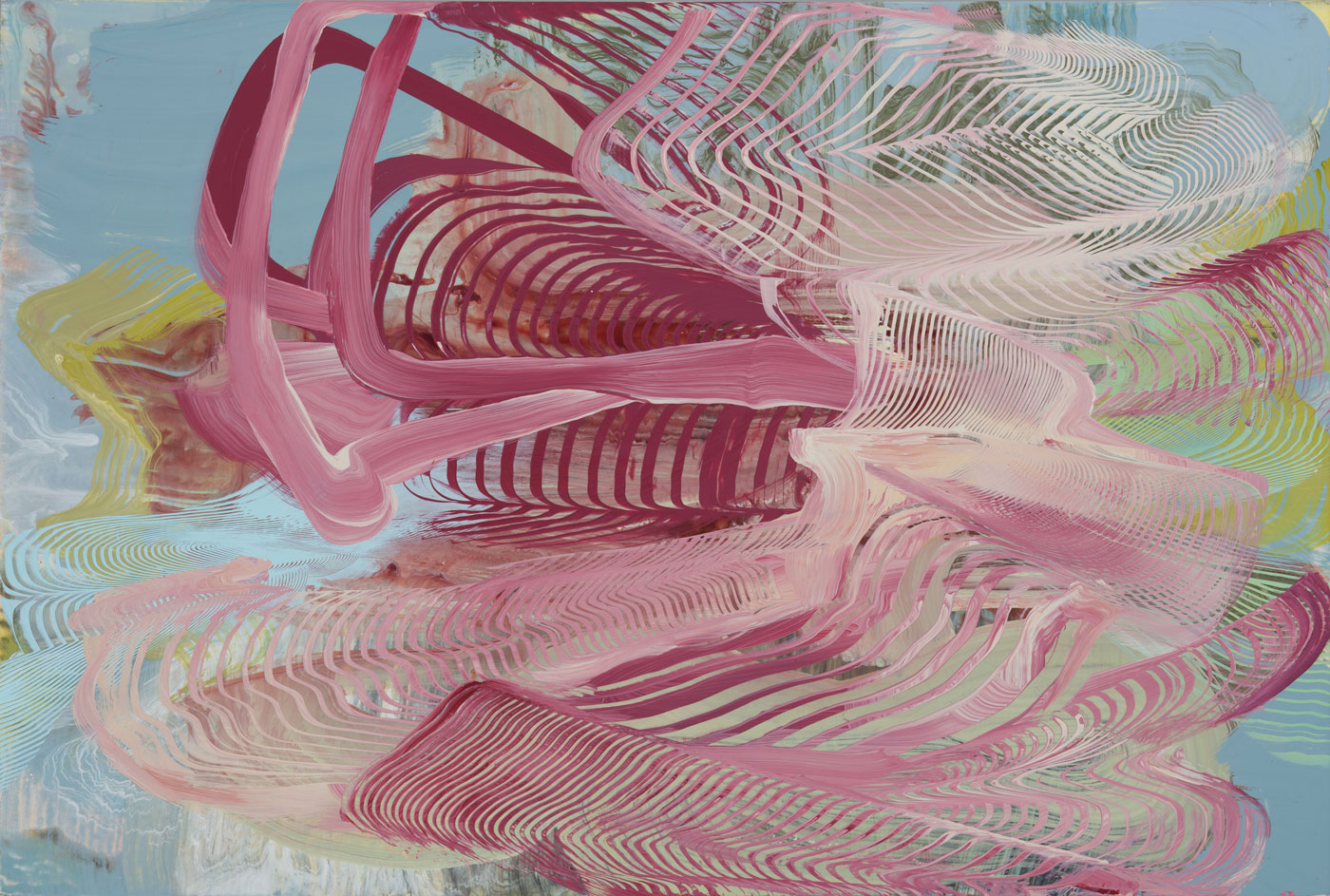 My paintings explore movement, turbulence, gesture as well as how space folds and moves. Layers and striping bend the two-dimensional space into a churning, vibrating composition, referencing parallel realities, topology, subatomic particles, shifting light and sound waves. I play with figure-ground, sometimes using reflective paints, mostly using scraping and striping to play with how negative & positive spaces take turns being in the forefront. I think a lot about the edges of a painting and use them to suggest environments beyond the picture plane. Movement, structure, line, color, repetition and reflection are important to the work. I frequently pour paint, and more recently, employ gestural brushwork & hand-carved squeegees to pull paint across surfaces creating linear, layered compositions. Scraping and removing paint in striped patterns alters perception and balance while revealing multiple spaces and new layers of information under the topmost layer. Pink has become a prominent color in my new work. After the Women’s March in January, 2017, I pulled out a pink painting I’d started and abandoned in 2014. As a young student, there was a sentiment that to be taken seriously as a woman, a female artist and feminist you had to abandon feminine things and colors (pink!). I did use it here and there in my work but mostly avoided it. After the Women’s March, I embraced pink as a symbol and color of strength. I pulled out that unfinished pink painting & completed it (Swirl and Roil, pictured). 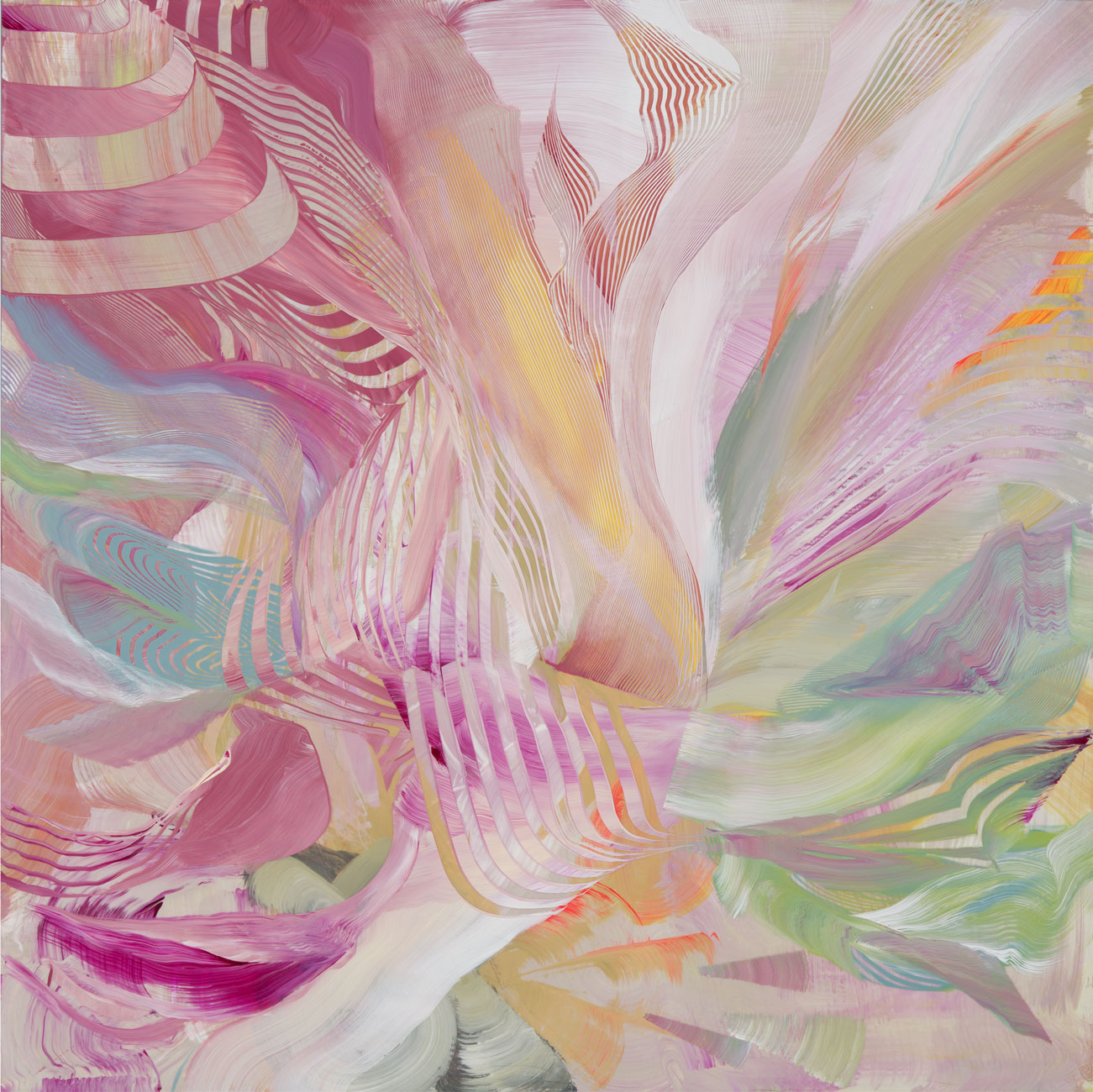 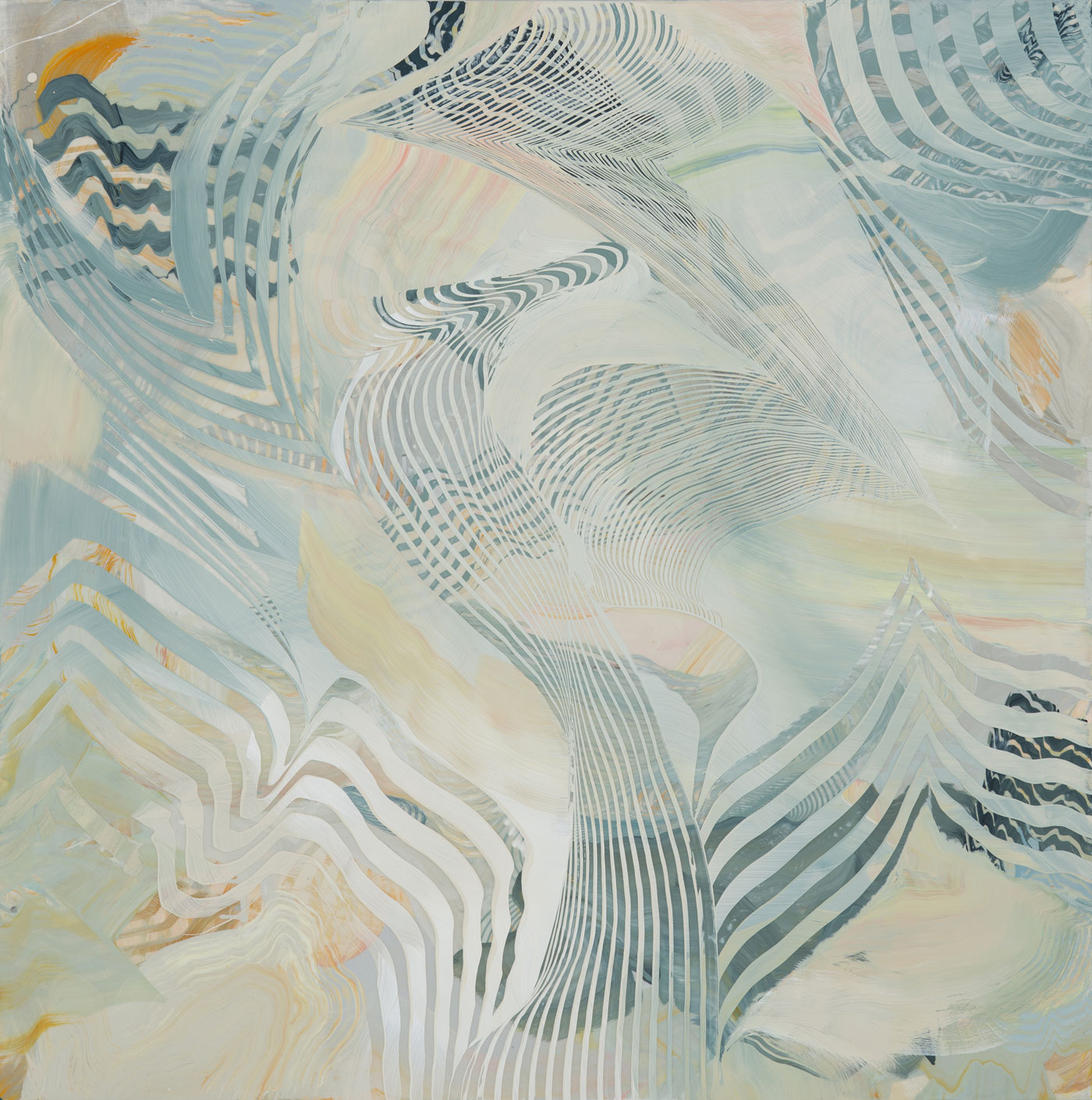 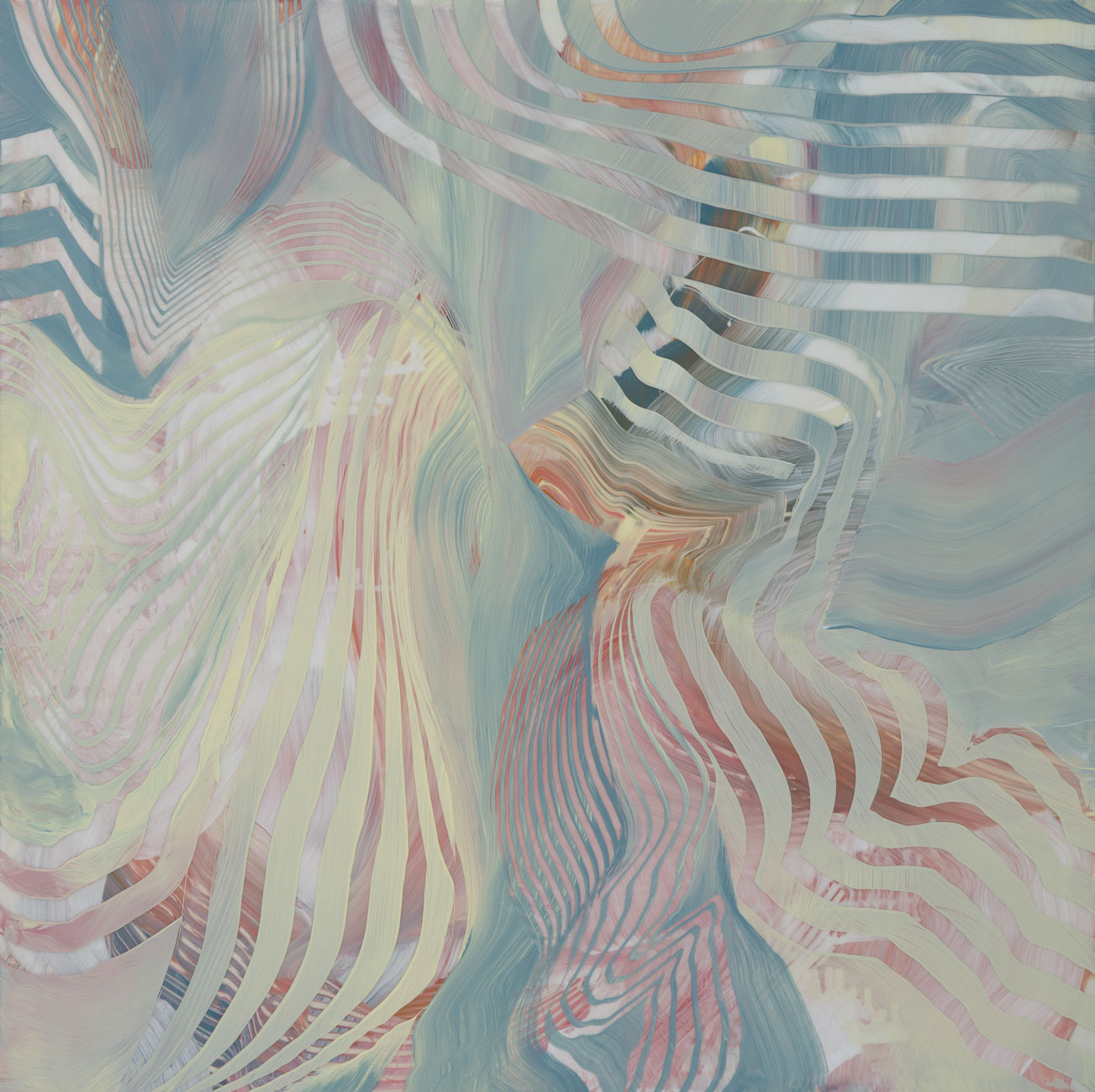 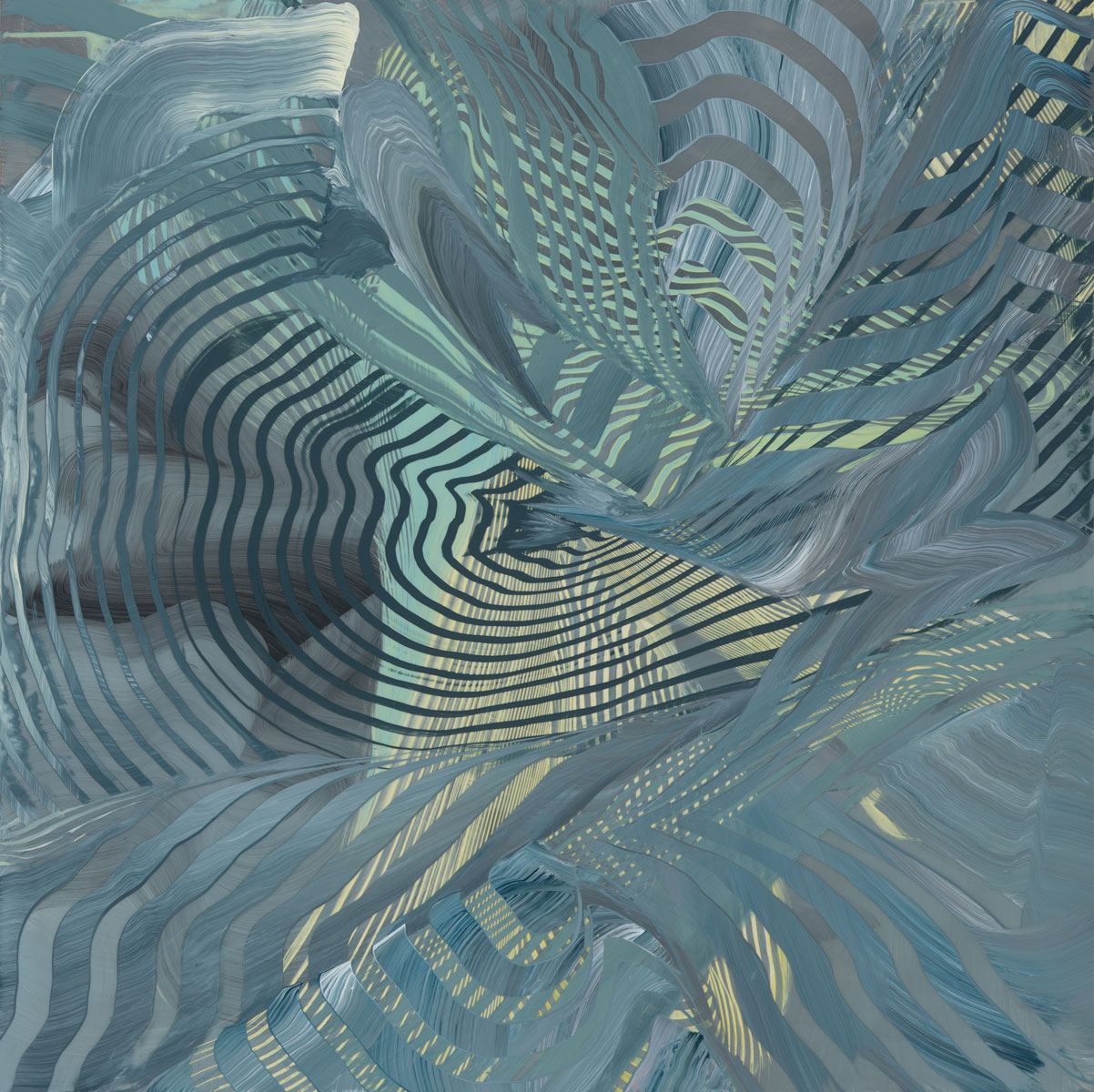